AT System waterstops have been specially developed for water excluding and retaining structures such as basements, reservoirs, sewage treatment works, etc. The AT System is an important advance in concrete joint protection which combines Active Technology with the conventional mechanical properties of PVC waterstops.

Conventional PVC waterstops work by the normal action of the concrete shrinking away from the joint and against one face of the ribs or bulbs of the waterstop. This creates positive pressure on the rib or bulb causing a “valve action” to resist water ingress. However, this shrinkage movement also forms an inevitable void on the opposite face of the rib or bulb which can allow water under high pressure to track along the waterstop searching for a path to bypass the waterstop. Subsequent cyclical movement of the joint can compound the problem resulting in further leakage.

AT System waterstops mechanical properties prevent water ingress by the same valve action but also actively seal the void around the rib or bulb to stop water bypassing or migrating. The hollow core of the bulb deforms to control the expansive forces to prevent damage to the concrete. 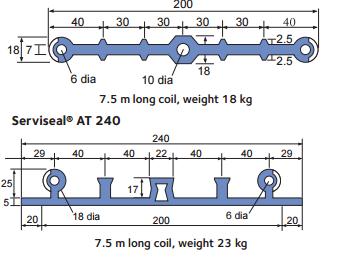 For SERVITITE® AT 200 & Serviseal AT 240 read the Safety Data Sheet (SDS) before use. Irritating fumes (Hydrogen Chloride) will be liberated when the product is heat welded. Ensure adequate ventilation. There is no legal requirement for a SDS for Secura clips. SDS’s can be obtained from GCP Applied Technologies or from our web site at gcpat.com 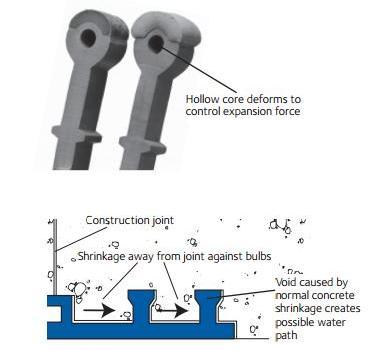 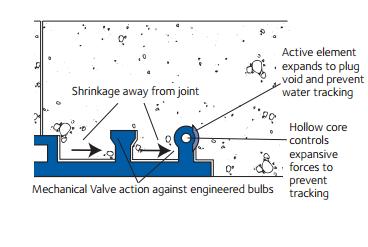 AT System with Active Element

SERVITITE® AT 200 is an internally placed waterstop; which is cast centrally in the concrete to resist internal and external water pressure. Serviseal AT 240 is cast on the external face for water excluding structures, such as basements and sub structures or ground bearing slabs only of water retaining structures. The two profiles can be combined, using factory produced transition junctions where Serviseal AT 240 is used on the base slab and SERVITITE® AT 200 is used within walls.

SERVITITE® AT 200 and Serviseal AT 240 can be supplied in rolls with standard or special junction pieces, or alternatively formed in fabrications to minimise site jointing. Butt jointing is achieved by heat fused welds similar to that for traditional PVC waterstops.

A continuous waterstop network should be used at all joints to prevent the ingress of moisture using only factory produced fabrications for changes of direction or profile with site jointing limited to simple butted welds. Before concreting, waterstops must be clean and free from concrete laitance, oil, grease or any other contamination that might prevent a good waterstop to concrete bond.

The Serviseal AT 240 waterstop should be loose laid directly on the blinding concrete or securely fixed into vertical shutters using nails bent over to prevent displacement during stripping of shutter.

Factory made junctions and fabrications

Available in shapes and configurations to suit site requirements. Coils and fabrications supplied in polyethylene wrapping to protect against the elements.

Under cover protected from water and temperatures exceeding +40°C.

After stripping the formwork, the second half can be cast into the adjoining slab with similar precautions taken with regard to “honeycombing”.

The SERVITITE® AT 200 waterstop must be supported in split-end formwork as described for slab joints, with great care taken to ensure that the waterstop does not fold over under the weight of poured concrete. The waterstop should be securely wired to the reinforcing steel using Large Secura Clips fastened over the end bulbs. Swelling commences 12 to 18 days after being embedded in concrete.

We hope the information here will be helpful. It is based on data and knowledge considered to be true and accurate, and is offered for consideration, investigation and verification by the user, but we do not warrant the results to be obtained. Please read all statements, recommendations, and suggestions in conjunction with our conditions of sale, which apply to all goods supplied by us. No statement, recommendation, or suggestion is intended for any use that would infringe any patent, copyright, or other third party right.

SERVITITE is a trademark, which may be registered in the United States and/or other countries, of GCP Applied Technologies Inc. This trademark list has been compiled using available published information as of the publication date and may not accurately reflect current trademark ownership or status.

GCP Applied Technologies Inc., 2325 Lakeview Parkway, Alpharetta, GA 30009, USA
GCP Applied Technologies (UK) Ltd, 487-488 Ipswich Road, Slough, SL1 4EP
This document is only current as of the last updated date stated below and is valid only for use in the United Kingdom. It is important that you always refer to the currently available information at the URL below to provide the most current product information at the time of use. Additional literature such as Contractor Manuals, Technical Bulletins, Detail Drawings and detailing recommendations and other relevant documents are also available on www.gcpat.uk. Information found on other websites must not be relied upon, as they may not be up-to-date or applicable to the conditions in your location and we do not accept any responsibility for their content. If there are any conflicts or if you need more information, please contact GCP Customer Service.