Which underground waterproofing systems are more reliable, bonded or un-bonded?

We all know the damage that water ingress can cause to infrastructure. To avoid costly repairs and downtime, you need the most reliable waterproofing system possible. When it comes to waterproofing membranes and technologies, the performance of a bonded system far surpasses that of un-bonded systems. 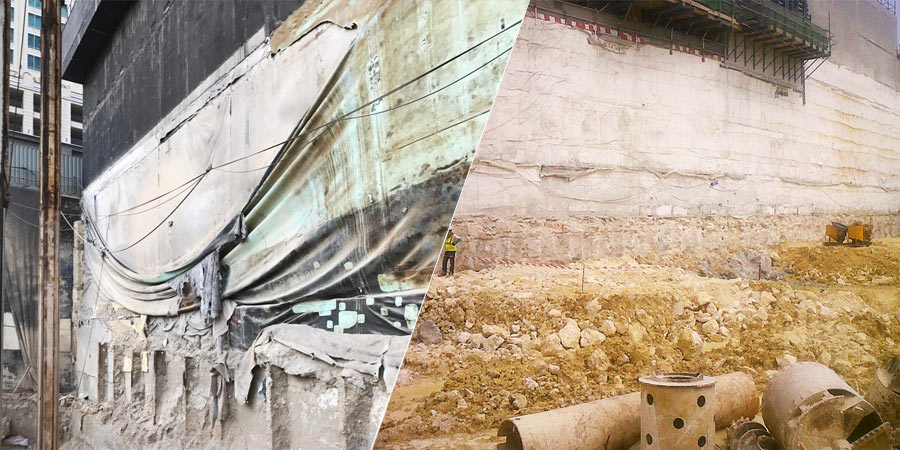 Un-bonded may not be ideal

As many engineers, architects, contractors and site owners have found, a non-adhering, un-bonded membrane often underperforms. The root of the problem? The space between the membrane and structure is inherently vulnerable to water tracking. Over time, this defect can cause the membrane to separate completely from the slab (which is often seen in younger buildings), or it can be damaged or dislodged as a result of settlement or neighbouring construction.

For example, the image (upper left) shows a project in which an un-bonded membrane was used as preventative waterproofing for a tower block basement. The structure incurred significant damage at the ground level, requiring a major investment of time and money to correct.

When an un-bonded basement waterproofing system is compromised, it may be tempting to repair rather than replace it. However, this rarely produces a satisfactory, long-term solution. An underground car park in Qatar offers a compelling case in point. Five years after construction, the un-bonded waterproofing membrane was failing to protect the basement from water ingress. Various attempts at arresting heavy leaks with internal resin injection and remedial draining were unsuccessful. As a result, the only solution was ongoing removal of water from the basement, which will have to continue for the remainder of the structure's life.

Why bonded is the superior option

A bonded basement waterproofing system addresses the shortfalls of un-bonded alternatives. The key is the bonding technology, which forms an impenetrable seal with structural concrete—ensuring it remains in position and prevents water ingress or migration, even in harsh climates and challenging site conditions. Bonded systems using high-density polyethylene film are also more durable, resilient and flexible than un-bonded systems, which are generally composed of polyolefin co-polymers, flexible polyolefin (FPO), PVC, styrene-butadiene-styrene (SBS) and ethylene propylene diene terpolymer (EPDM)—materials that are less durable and are more susceptible to damage.

A recent project in Doha, Qatar demonstrates how a fully-bonded waterproofing system performed optimally amid a new phase of construction. Three years after PREPRUFE® waterproofing membrane with Advanced Bond Technology™ was applied to a temporary shoring wall, and a basement wall was cast against it, the temporary wall was removed.

During excavation, the contractors found that the exposed PREPRUFE® waterproofing membrane was fully bonded to the existing basement slab edge and wall (upper right). The waterproofing membrane, which tightly seals and protects seams from more than 70m water pressure, remained fully bonded with the structure—even when exposed to six weeks of Doha's harsh desert climate, where average ambient temperatures can reach a sweltering 50° C (122° F).

Relying on an un-bonded waterproofing system can leave a building vulnerable to defects and damage. By choosing a fully bonded basement waterproofing system like PREPRUFE® Plus, you can mitigate those risks and the associated repair costs. The result is peace of mind that comes with knowing the structure will be protected against water ingress throughout its service life.